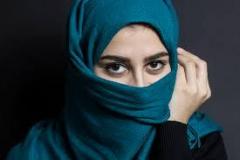 
1.
For people of ardor,doors and walls are not barriers to sight,
Rather,they act as wings of the bird of the gaze.
(However many restrictions are there,that is how much progress ardor will make.)
(Because of the obstructions alone this power has been born in the imagination.)
2.
My turmoil of weeping,making progress,has created such a condition in the house that,
The wall has fallen and become a door,and the door has been blocked and turned into a wall.
(My constant weeping had its effect,and destroyed the house.)
(The tears so blurred my vision that I could not tell doors from walls,but mistook them for each other.)
3.
This is not the shadow of the doors and walls that can be seen at a little distance from them,rather having heard the good news of the beloved's coming,
Doors and walls themselves have gone some paces forward to welcome the guest.
(Someone in the street outside the lover's house notices what he thinks is a large dark shadow,only to be corrected by the lover,that is not a shadow,that is my walls and doors themselves.They so deeply share my ecstatic joy at the news of the beloved's arrival that they have gone forward a few steps to meet her.)
4.
It is a great pity,you have made wine of splendour so cheap that,
Even the doors and walls of your lane have become intoxicated with the wine of the sight of you.
(The lover has been so affected and intoxicated by the appearance of the beloved that to his unfocused gaze doors and walls appear to be swaying like drunkards.)
(When intoxication is very acute,that is exactly how things appear.)
5.
My gaze has dwelt so heavily on doors and walls,in the state of waiting,that it is as if they have become a shop for the goods of waiting,
If you are a purchaser and connoisseur of these goods,then come.
(Oh beloved,the group of lovers stand intently staring at your doors and walls,if you want to enjoy this spectacle,then come,the sight is worth seeing.)
(If you have a nature fit for waiting,then there is no lack of radiance.)
6.
It never happened that I collected equipment for weeping,
And doors and walls did not fall at my feet.
(If I had not seen doors and walls falling at my feet [collapsing],then I would have wept my heart out,and the house which appears to be in this ruined state would already have been torn apart long age and not even a trace of it would have remained.)
(The doors and walls begging the lover not to weep such a flood that they would be destroyed.)
7.
When she came and settled down in my neighborhood,
Then the shadow of my doors and walls began to sacrifice itself for her doors and walls.
(The shadow of one house often advances and reaches to another house,from this idea was born.)
(When beloved came to stay next door,not only did I almost die of joy,but the very doors and walls of my house adored the doors and walls of her house,because they fell under the spell of the exquisitely cool and sensual shade that the new comers provide to my house that had been for so long burning with passion.)
(My doors and walls adored them so by devotedly providing shade to the newcomers,self-sacrificially interposing themselves between the cruel sun and the beloved's house.)
8.
In separation from you the bustle of my house pricks in my eyes,
When I see my doors and walls I always weep at my memory of you.
(The necessary result of something's pricking in the eyes is that tears begin to flow.)
(Without the beloved,even that minimal degree of domestic comfort offends him.)
9.
At the time when the flood comes,do not ask me about the selflessness of passion,
It is as if doors and walls enter a mystical state,and they become absorbed in dancing.
(The house of the body was waiting with such ardor for its destruction that now,when death is about to come,its walls and doors are dancing.)
(To construe the doors and walls collapsing in the flood as a dance,is such excellence of expression that there is not enough space to do justice to it.House refers to the lover's heart.)
10.
Oh GHALIB,do not tell your secret of love to anyone except for doors and walls,
If you can not keep your secret of love concealed and consider it necessary to tell it to someone,then instead of a person,tell it to doors and walls.
(The secret of love should never emerge from the mouth.)
(Doors and walls have become the lover's reliable companions and intimates,reacting to and even sharing his passion.)
((How better to wrap up a ghazal about doors and walls.))
____