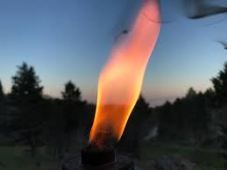 
1.
My heart is burned in the secret fire of love without notice,
It turned me to ashes in such a way that until the fire is extinguished,I was not aware.


2.
The fire of envy having seen meeting with others the taste for union waned,
The despair(Envy,Fire) made me lose heart to the extent that no longing for union remained(Hope,Desire).


3.
I have attained oblivion in God,and in that stage then O! inattentive more than once,
From my fiery sighs,I destroyed the reputation of Phoenix.
(Inattentive=People who do not understand human progress)
(Phoenix=The great proof of nonexistent)


4.
Where might I go to utter the heat of my turbulent temperament(Themes),
The moment I thought to leave the city and wander in the desert,fire burst out in desert.


5.
The carnival of my wounds was worth seeing,but the heart who was the arranger of this illumination has itself not remained,
Before the heart was extinguished, desires remained in it,now those (Wounds) are worthless.


6.
Now I am and the longing is to live separately from the people here,
When I saw the outward love and inward enmity,the heart became cold.
(Hypocrisy)
____